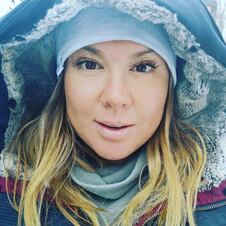 Cate McGahey is a Canadian painter who creates primarily mixed-media semi-abstract florals. Her artwork is influenced by her long standing love of flowers, nature and her time studying & teaching in Paris. She is an active member in the arts community, being a current member of various visual arts groups and collectives located locally, and in Toronto. Cate also takes great pride in her work as a French Immersion Art teacher in the Waterloo Region. She studied French Linguistics and History, at La Sorbonne in Paris. Cate graduated from UW with an Honours B.A in French and from UWO with a B.Ed & M.Ed. Although most of her ability comes from informal training, Cate has spent some time studying under established artists such as Kathleen Schmalz and Lydia Panart.

Cate started sketching flowers and trying various mediums at a young age but it wasn’t until her 30s that she became inspired to experiment with oils. At the age of 32 she was confronted with her own mortality, and the capricious nature of life, when she was diagnosed with cancer. Cate used painting as a way to work through her anxiety, fear and fatigue. The impressionistic, luscious, textural and flowing style that her work is known for has come from the unscripted, spontaneous and intuitive way she shares her memories, thoughts and unabashed feelings on the canvas. Each bloom isn’t really a flower. It’s a memory, a person, telling you stories, singing to you and blowing in your face like a warm breeze.

“The flower is a physical representation of the indescribable beauty, celebrated differences and wonderment of life on earth and throughout the known universe. I’m continually intrigued how texture, light and the subtlety of colour allow the nuances of each bloom, and its movement, to change from one form to another.”

She is currently the Vice-President of the Kitchener-Waterloo Society of Artists.
﻿