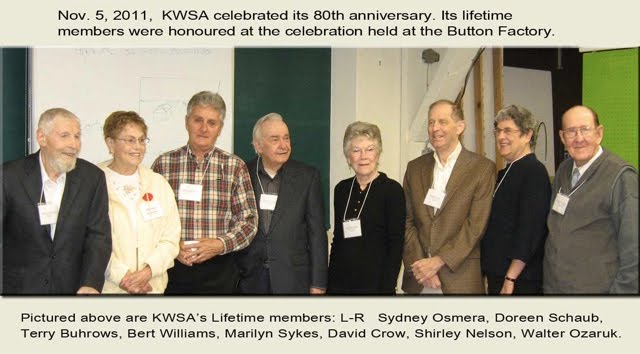 
The History Of The Kitchener-Waterloo Society Of Artists

The formation of this art society was the inspiration of Ralph Connor (1895-1951) who came to Canada from England with his parents at the age of 18.  He became President and General Manager of The Deluxe Upholstering Company in Waterloo.  A fine artist himself, he was President of the local Art Society for many years.  In June 1931 following an advertisement placed in the Kitchener Record, a group of artists held their first meetings in the Oak Room at Schreiters Furniture store in Kitchener.  During the winter, the activities of the Art Society of Kitchener (as it was called then) consisted of self-critiqued group painting and during the summer, sketching trips.  These were Depression years and expeditions were mostly on foot or by street car to places like Bridgeport, Conestoga and Three Bridges.

The Art Society rented a studio and in their first show in April 1932, surprised the public with a large number of paintings.  Unfortunately, the quantity of the paintings far exceeded their quality and only one was sold. However, the next show produced excellent reviews and by 1941 they were exhibiting regularly, largely due to the efforts of Mabel Dunham at the old Kitchener Public Library on Queen St.  Later with declining membership, they could no longer pay the rent and lost their studio.  The original group eventually dwindled to a mere eight members.

In 1949 the Doon School of Fine Arts was started by Ross Hamilton and the Society met there.  He did much to obtain recognition for the group outside of the local community, organizing many events.  He arranged for one major show at the Art Gallery in Vancouver.  In retrospect he had an outstanding influence on the Society.

Between 1955 and 1956 the K-W Gallery Association was formed by influential community leaders and a number of KWSA members served on various committees.  It was through the efforts of the Gallery Association that the bicycle shed next to K-W Collegiate was obtained and renovated for visiting art shows and KWSA exhibitions.  A number of art “marts”  were held over the years to help finance the bicycle shed gallery, but obtaining money was always a problem.

When the new Kitchener Public Library opened in 1962, the Society was allowed to use the facilities for exhibits and art rental.  A great deal of controversy preceded the commissioning of a large mural in the new library with many artists competing for the honour.  The commission finally went to KWSA member, Jack Bechtel (1923-1966) who had studied at OCA.  This 560 sq. ft. mural completed with a special rough textured surface of lime plaster may be seen on the southwest wall of the main library.  The title is Enlightenment—“truth (light) becomes knowledge”.

In 1968 the Society with the help of a service club, purchased the property on the corner of Benton and Charles Streets at the site of the vacant Pentecostal Church.  This was opened as The Kitchener Art Gallery.  The lower level gave the Society more space for painting, and teaching, and exhibiting took place on the upper floor.

When the Centre in the Square officially opened on September 29, 1980, it was an accomplishment which KWSA had long been working for and had in large part laid the foundation. The Society was invited to hold regular meetings there and workshops took place in various rooms in the Gallery.  The Eastman Gallery in the main section was formerly known as “The Cycle Gallery” to commemorate the old bicycle shed.  KWSA members and the Gallery were very mutually supportive for two decades.  Many KWSA members were also members of the Gallery and some were volunteers,  financial donations were made and paintings were donated for fund-raisers.  KWSA Annual Juried Shows were showcased there and were for many years sponsored by Budd Canada. Then in 1999 under the policies of a new directorship which moved away from partnerships with community art groups, KWSA was no longer welcome there.  The City of Kitchener was supportive and KWSA began meeting at The Conestoga Room at Kitchener City Hall.  In 2004 KWSA was offered a place at the Waterloo Community Arts Centre (the Button Factory), our present location.  KWSA was encouraged to participate in a major biennial five-county exhibition at the Kitchener-Waterloo Art Gallery in 2003.  This continued for several years until the Gallery implemented new programming.

As Waterloo Region’s oldest continuously operating arts organization, KWSA is still going strong with 135 members.  We meet regularly from September to June, and host many leading fine artists as presenters during the year.  Membership information, applications and examples of members’ work are found on our website.  Our annual juried show at Homer Watson House and Gallery is very well attended and a members’ show is organized every year.  We support the Waterloo Community Arts Centre and various members participate in their juried shows and shows at other galleries.

Over the years we have supported many art initiatives in the community and continue to welcome and mentor artists on all levels.