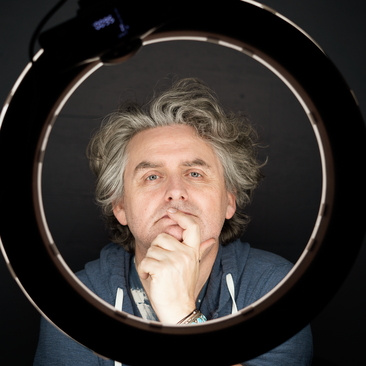 Andy Wright (b. 1969, London, United Kingdom) is a photographer, mixed media artist, and writer who lives and works in Kitchener. He is drawn to work in these media as a creative with many stories to tell, and many images locked inside his head awaiting the chance to become real. Inspired by the visual artist Robert Mapplethorpe with an admiration of the absolute breathtaking beauty shown in his floral pieces and how they juxtapose against his stunning and very thought provoking adult black and white portraiture. Andy is also inspired by the late author Sir Terry Pratchett whose comedic genius and ability to hold a fantasy-fueled candle up against humanity for both ridicule & self examining analysis inspires his wit within his own writing.

His art-making process consists of constantly seeking the real life moments that align to the pre-existing photographs that are constantly adrift in his mind. His ideal exhibition space is within a gallery because art should be appreciated in a tangible, physical form to properly view and visually embrace the work.

As a multidisciplinary photographic artist; Andy’s work combines his cross genre experience to deliver an ethereal something extra to his art. In addition, his concert touring pictures have been published around the world, and his work has been featured on numerous book covers, CD’s and vinyl albums.

​He and his partner, fellow KWSA member Claire Donnison, recently launched CuriosityClicks, a collaborative arts project where 10% of the proceeds are donated to reforestation initiatives in Kenya.